We can make a worksheet more efficient by creating drop down lists. What is the use for drop down lists? If someone uses the worksheet that we created, they can click on an arrow and then click on one of the entries in the list in order for the cell to be filled. Just follow the steps below in order to learn how to create a Drop Down List in Excel 13. 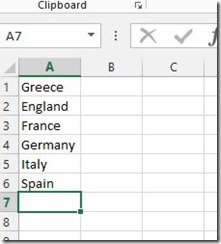 This step is optional:

Then the Data Validation dialog box appears as shown below. On the first tab of the dialog box named Settings, we select under the Validation Criteria what we want to Allow. In our case, from the drop down menu under the command Allow we select List.

In the Source box, we can either select the range of cells that we have typed in the information or we can type an equal sign (=) and then the name that we gave to our list. In this example =Countries

Finally, we move on to the next tab named Error Alert. On this tab we can activate the check box next to the command Show Error Alert After Invalid Data Is Entered and then pick an option from the Style box drop down list. Then when someone enters invalid data in the drop down list message will show up every time. Once we have done all our settings we just press the OK button to return to Excel.

Below I have inserted wrong valid in the cell that contains the drop down list at straight away a Microsoft Excel Dialog Box appears informing us the following:

The Value You Entered Is Not Valid

Below you can check out the video describing how to create a Drop Down List in Excel 13.

MVP: Honored with the MVP (Most Valuable Professional) for OFFICE SYSTEM title for the years 2011, 2012, 2013, 2014 and 2015 by Microsoft, for my contribution and commitment to the technical communities worldwide. Microsoft Master Specialist: This certification provides skill-verification tools that not only help assess a person's skills in using Microsoft Office programs but also the ability to quickly complete on-the-job tasks across multiple programs in the Microsoft Office system
View all posts by Smart Office - philippospan »